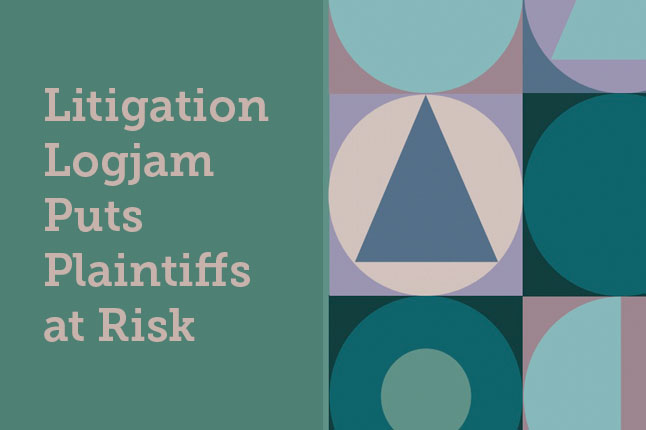 Trial-focused Burg Simpson has seen the effects of court closures firsthand. As cases get continued, clients must weigh the benefits of settling soon or seeking a larger award at trial down the line. Firm founder and shareholder Mike Burg talked with Law Week about the impacts of the courts’ backlog and the lasting effects he expects for the practice.

LAW WEEK: What has been the impact on your firm of court closures or slowdowns that have resulted from the pandemic?

BURG: It’s had a substantial impact. We’re a trial firm, and we have offices in Arizona, Nevada, Wyoming, Florida, New Mexico and Ohio — it’s not just here in Colorado where trials — jury trials in particular — have been put on hold and continued. I think the last trial we had here in Colorado was sometime in late February. It has a substantial effect on us and on the courts.

I have great empathy for the state and federal judges everywhere around the country trying to deal with this. The complications for the courts are that they have jury criminal trials where speedy trial is a constitutional right, and if the defendants waive that, then they can move those cases. We don’t do any criminal trials, but all of our trials have been pushed and continued. Some have been continued short-term for months and then continued again. Others have been continued until sometime in 2021. So, we’re hopeful that most of the trials that were continued out of 2020 will get tried in 2021.

The effect of all that on the courts is eThe effect of all that on the courts is enormous. But it also affects a firm like ours, which is a trial firm. We know that, generally, cases do not settle until you get closer to trial when the realities of going to trial and the risks of trial set in. So, most of our cases that have been continued, especially the larger ones, have come to a standstill in terms of any type of settlement or negotiation. We’re still having mediations by Zoom and by Webex. We still are having some court hearings on discovery disputes. There’s been an increase of discovery disputes surprisingly, but 90% of what we do or more is on a contingency.

From our standpoint, I guess the good news is that in mass torts or construction defect, we’ve had cases that have settled a year ago or two years ago, and the actual distribution of the funds to our clients and to us — because of the nature of those cases — continue to be paid years later. From our standpoint, because we’re diversified, that has been helpful. That certainly doesn’t change the issues that we face with regard to our trials not going forward and creating potential cash crunch, but it’s helpful.

Also, in the construction defect area, many of the cases go to arbitration. There, because we don’t have to seat jurors, the arbitrations are being completed and the results of those arbitrations are creating additional financial benefits when we win.

I think it’s changed the practice significantly, and I think we’re going to see those changes are going to be permanent. When we’ve done our conferences with a judge in discovery disputes, many of the judges have indicated that when the pandemic is over, they’re still going to use Webex or Zoom rather than having everybody come down to the courtroom. I think we’ve all become better in terms of how that works and how it functions.

LAW WEEK: How have all of these changes in the courts changed your actual practice so far?

BURG: It’s changed our practice in terms of us having to go and get PPP and put up barriers and change the structures within our buildings. We have two offices here in Colorado, and we have brick-and-mortar buildings and we operate out of other states, and we spent hundreds and hundreds of thousands of dollars across the country on that and making sure that our people are working for home. We set up remote access for every one of our 175 employees. So that was a significant expense that I think us and I’m sure every other firm has had to do.

And I do think after the pandemic is over we’re going to find more people working remotely. We’re going to find more depositions are going to be done on Webex remotely, but I do not want to do trials remotely where you don’t have the ability to look jurors in the eye and talk to them face to face. I’ve heard of some trials across the country that have been done remotely, and for the most part, the word I’ve gotten back is that they they’ve had tremendous problems with them. And mostly lawyers I’ve talked to who have done one said they would attempt never to do another one.

LAW WEEK: What issues have had the biggest impact on your practice this year?

BURG: I think the most significant issue we face around the country, here in Colorado and everywhere else, is that we face some things that we’ve never seen before. We have people out of their jobs, on unemployment, people don’t have enough food. Many of those people are plaintiffs, and then the pressure is on them to try to get fair compensation in the circumstances that they’re living under, where their income has either been completely removed or they’ve had health issues among their families.

We’re seeing a lot of clients who were really stressed, saying, “where are we, what are we doing, where can we be?” And, unfortunately, the defense bar, and more importantly their clients, are really not very sympathetic to them. We want to do what the client needs and wants to do, but at the same time, we recognize that if a client takes a settlement that is significantly less than what the real value of the case is, years from now, they’re going to pay the price. Because the money they get is money they need for medical treatment, they need it for their disabilities that are caused by the accident or medical malpractice. So, it has had a tremendous effect on our clients.

And I think it’ll be interesting in the future to see what kind of decisions we get out of the Supreme Court. The Supreme Court’s makeup over the last five or six years has changed significantly, and so you’re hopeful that there are going to be decisions coming from the court that will rectify many inequalities we see in the law. We practice in Wyoming and Arizona, two very conservative places, and they do not have any caps. They trust the people to make the decision and the judges. If they find that there’s a verdict or judgment that is excess, the judge has the capability and the ability to reduce it, or the Court of Appeals or the Supreme Court. So, there are a lot of things that are still going on that. We’re hoping.

LAW WEEK: Is there anything else that you’re anticipating coming up next year that will change things or continue the changes we’ve seen so far?

BURG:  I hope that the court system will come back to normal sometime either in late spring or in the summer where we have enough people that have had the vaccine, so that we can return to some normalcy in terms of the way we try cases and operate in the court system. I think to create a situation where a judge may attempt to force us to try cases remotely or wearing masks with barriers, that changes the entire courtroom setting in a way that can be disadvantaged. So, I’m hopeful that we can return to some normalcy and start trying cases, sometime in late spring or early summer. Our trial calendar is very filled, starting in May, all the way through the end of the year.