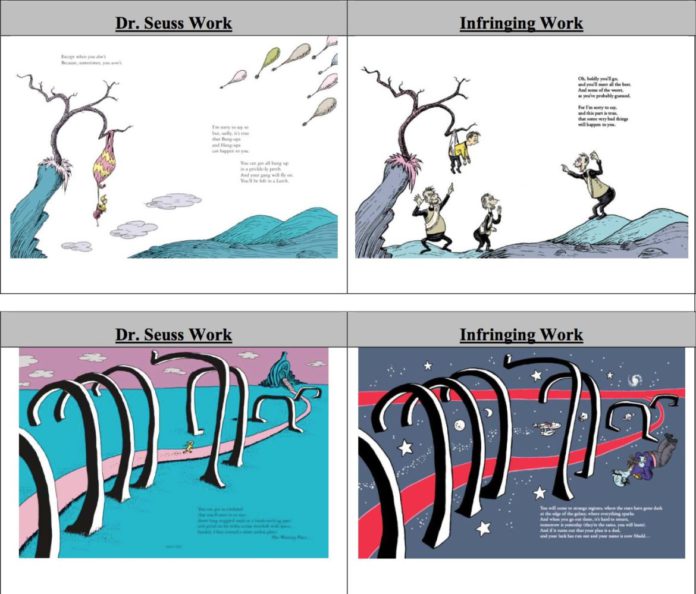 One of the most iconic names in children’s literature received shielding from an argument that it had been legally parodied or transformed in a closely watched case involving the copying of a Dr. Seuss story for a Star Trek-themed tale. In a decision released Dec. 18, the 9th U.S. Circuit Court of Appeals held that the proposed lampoon of “Oh, the Places You’ll Go!”could not qualify as a fair use of the copyright on the 1990 Dr. Seuss work.

Hailed as one of the most popular graduation fables ever published, “Oh, The Places You’ll Go!” was a USA Today number one bestseller in 1997 and was second on that newspaper’s list in 2015 and 2017. The book uses an unnamed protagonist and a narrator in a parable about the trek through life.

The “Oh, the Places You’ll (Boldly) Go!” book was intended to be a “mash up,” that combined elements of the Seuss creation with original ones. Writer David Gerrold, who wrote the 1967 Star Trek episode titled “The Trouble with Tribbles,” and illustrator Ty Templeton planned an allegory in which Captain James T. Kirk, Mr. Spock and the rest of the U.S.S. Enterprise crew would travel through a world inhabited by the characters of “Oh, The Places You’ll Go!” Connecticut-based ComicMix initiated a crowdfunding campaign to raise $30,000 to cover the costs of marketing and distributing the book. By fall 2016, Dr. Seuss’  estate demanded that ComicMix stop its effort to produce the Boldly book and sent Kickstarter a Digital Millennium Copyright Act notice that led it to remove the fundraising page and retain all of the proceeds that had been donated.

Hostilities in court between Dr. Seuss Enterprises, the corporate entity that oversees the estate of Theodor Geisel (Dr. Seuss’s real name), and ComicMix soon followed. A federal court in San Diego found in 2019 that the Boldly book qualified as a parody. U.S. District Judge Janis Sammartino found that ComicMix did not use Geisel’s characters, words or “universe.” “Boldly does not copy [Dr. Seuss’ illustrations] in their entirety[,] but rather ‘infuse[s each] with new meaning and additional illustrations that reframe Seuss images from a unique Star-Trek viewpoint.’” Sammartino concluded that Boldly!  was “highly transformative” of “Oh, The Places You’ll Go!”

Elevated to the 9th Circuit, the case became a battleground over freedom of expression on which the contours of the fair use doctrine have been further clarified. A doctrine of copyright law that dates to the early 19th century, the defense allows liability for infringement to be avoided when a court applies four considerations and determines they indicate a new creation that is not derivative of the protected work: the “purpose and character” of the application, the “nature” of the protected opus, the amount and “substantiality” of the portion used in relation to the entire copyrighted piece and the effect of the use on the protected creation’s potential market or value. “It doesn’t lend itself to bright line rules or to nice clear categories,” said Kate Lucas, an associate at Grossman, a New York law firm that specializes in representing buyers and sellers of art and virtuosos of craft.

Parody was the ground on which ComicMix decided to make its stand. The comic book publisher argued that it had transformed “Oh, The Places You’ll Go!” enough to make the Boldly book an entirely new contrivance. Judge Margaret McKeown’s opinion for the unanimous panel was having none of it. ComicMix “claims Boldly is a parody because it situated the ‘violent, sexual, sophisticated adult entertainment’ of Star Trek ‘in the context of [Dr. Seuss]’ to create a ‘funny’ book,” she wrote, which the 9th Circuit had already held was not enough to generate a parody. McKeown also dismissed the serializer’s assertion that its aim was to criticize Seussian “narcissism” in Oh, The Places You’ll Go! produced a parody. That argument, she said, was “completely unconvincing.”

Lauding the decision, University of California at Berkeley law professor Peter Menell said that absurdity in the application of the copyright law would result had the 9th Circuit found otherwise, “If combining two things is a parody — which is [the] core of the defendant’s defense — then nearly anything could qualify,” Menell, who also helps to direct the Berkeley Center for Law & Technology, said in an email message. “This interpretation would eviscerate Congress’s balance of interests in the Copyright Act.”

Aping the setting of a story, along with the details of its illustrations and scenes, cannot produce a parity, Lucas said, unless “something new” is added. For the Boldly book to qualify for fair use as having such a new purpose, it would have needed to “be either making fun of [Dr. Seuss’ protected work] or critiquing it or spoofing it somehow,” she said. “They weren’t spoofing it. They weren’t mocking it. There was no commentary on it.”

ComicMix’s duplication of Geisel’s purpose in writing “Oh, The Places You’ll Go!” also meant that the Boldly book was not otherwise transformative of Geisel’s bestseller, the 9th Circuit panel found. McKeown’s opinion concluded that the new content added by ComicMix did not result in a metamorphosis because it did not provide a new context for the 1990 book’s Seussian message or provide any “new expression, meaning or message.” Instead, McKeown and two other judges concluded, “[Oh, The Places You’ll] Go! was merely repackaged into a new format, carrying the story of the Enterprise crew’s journey through a strange star in a story shell already intricately illustrated by Dr. Seuss.”

Examining the amount of copying that ComicMix had done, McKeown and her colleagues, judges Jacqueline Nguyen and Randy Smith, next determined that the Boldly book had taken a “substantial” amount of Geisel’s work . “ComicMix’s copying was considerable — it copied ‘14 of 24 pages,’ from the original book — close to 60% of the book — and significant illustrations from “How The Grinch Stole Christmas” and two stories in “The Sneetches and Other Stories,” the panel found. “For each of the highly imaginative illustrations copied by ComicMix, it replicated, as much and as closely as possible from [Oh, The Places You’ll] Go!, the exact composition, the particular arrangements of visual components, and the swatches of well-known illustrations.”

Side-by-side comparisons of illustrations from both Oh, The Places You’ll Go! and the Boldly book proved persuasive to the judges on the question of whether ComicMix had crossed the line into copying. McKeown described the process followed by Templeton, who had studied the layout of the pages in the Seuss book and had tried to achieve similarity in composition. She also cited Templeton’s statement in a deposition that he had “meticulously tr[ied] to reproduce as much of the line work as he could.”

Yeoman originality in the artistry of the Boldly book was not apparent to the three appeals judges. McKeown pointed not only to “verbatim” copying in the illustrations, but also accused ComicMix of taking “the heart of Dr. Seuss’ works.” She cited 10 appearances of the machine that is a prominent feature in “The Sneetches and Other Stories,” which Templeton admitted that he had tried to “match,” as well as the Sneetches characters’ poses. “Boldly also captured the particular ‘crosshatch’ in how Geisel rendered the machine, the ‘puffs of smoke coming out of the machine,’ and the ‘entire layout,’” McKeown wrote.

Overleaping “fake math” proposed by ComicMix that suggested copying from only a few of Geisel’s handiworks was not enough to be “substantial,” the panel tersely dismissed an argument that the fourth fair use factor had been established. “Under ComicMix’s theory, the more prolific the creator, the greater license a copyist would have to copy and imitate the original works,” McKeown wrote. “Nothing supports that argument.”

Underlying the copyright code is a Congressional goal of assuring creators a market for their work. Kevin Madigan, vice president of legal policy and counsel at the Copyright Alliance, said that the 9th Circuit’s decision highlights the importance of the method used to prove that one exists. While McKeown’s opinion discussed the licensing arrangements for Seussian characters that Geisel’s estate has put in place, the market for a creator’s work does not already have to exist in order for the law to extend protection. “There only needs to be a potential market for the licensing of the underlying work,” Madigan said. “Even if Dr. Seuss Enterprises had not been actively licensing Oh”  The Places You’ll Go for the specific purpose of a mashup, that doesn’t mean they wouldn’t potentially do that in the future.”

Like “Oh! The Places You’ll Go!”,  the Boldly book aimed at readers interested in a lesson relating to life’s path after a graduation event. The duplication, when considered alongside ComicMix’s failure to make any significant effort to address the size of the market for Geisel’s work, meant that the fair use defense was not established. “That’s sort of a controversial topic in the copyright world,” Madigan said. “The person claiming fair use has the burden of proving the four factors. ComicMix was trying to say that the burden shifts to the copyright owner to prove the fourth factor, market harm. The 9th Circuit said no.”

Lucrative opportunities for derivatives of Geisel’s work exist, the 9th Circuit found, pointing to agreements by Dr. Seuss Enterprises to authorize several of them. The catch, Madigan explained, is that someone who riffs off a protected work will end up adding to the creator’s proceeds unless fair use is established. “The derivative work is the exclusive right of the copyright owner,” he said.

Giving a win to ComicMix on a trademark infringement claim, McKeown’s opinion also concluded that federal trademark law did not protect Geisel’s fonts and illustration style from ComicMix’s use unless the Boldly mashup was not artistically relevant or was misleading. The 9th Circuit judges decided that Sammartino had properly dismissed the allegation of trademark transgression on those two factors.

Once the case is returned to the U.S. District Court for the Southern District of California, Sammartino will have to resolve the questions of whether copyright infringement occurred and, if it did, the damages to be awarded Geisel’s estate. Lucas said the amount of damages awarded will have to take into account the fact that the Boldly book was never distributed.

This article appears in the Jan. 4 issue of Law Week Colorado. To read other articles from that issue, order a copy online. Subscribers can request a digital PDF of the issue.