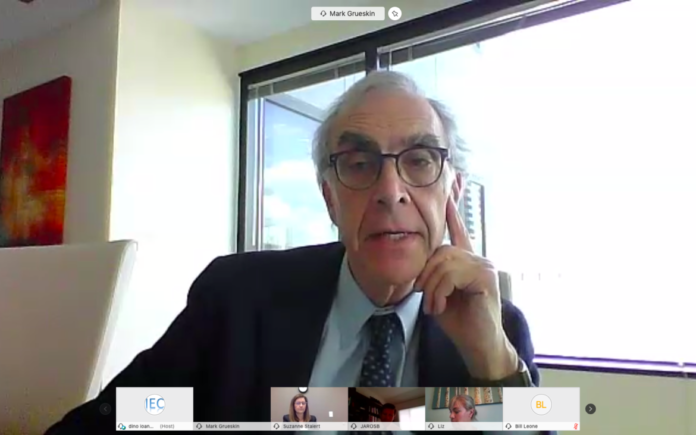 The first day of a remote hearing conspicuously missing its subject ended with Colorado’s Independent Ethics Commission voting to hold former Gov. John Hickenlooper in contempt for not appearing at the hearing but still undecided whether he violated the state’s constitutional gifts ban.

Hickenlooper refused to appear to testify Thursday, saying the remote format — conducted on Webex — wouldn’t give him a fair hearing. At the eleventh hour — after  3 p.m. — his attorney said he would comply with the commission’s subpoena to testify and appear on June 16. But the commissioners, visibly frustrated over Hickenlooper’s refusal to appear Thursday, said they were disinclined to allow him to wait until later in the month.

An attorney for Hickenlooper, Mark Grueskin, did appear. At its outset on Thursday morning, the commission needed to decide whether to go forward with the hearing without Hickenlooper appearing. The commission subpoenaed the former governor to appear, and on Wednesday night, the Denver District Court refused to quash the subpoena. Hickenlooper has objected to holding a remote hearing, saying it hampers his due process rights, and he appealed the district court’s decision to the Court of Appeals.

But a commission member said the commission had the authority to go forward without Hickenlooper at the hearing. Members voted unanimously to file a court motion to enforce the subpoena and require Hickenlooper to testify. Attorney General Phil Weiser filed the petition mid-afternoon Thursday.

A 2018 complaint filed by a conservative-backed nonprofit alleges the former governor violated Colorado’s ban on public employees accepting gifts by taking private flights and using luxury accommodations paid for by private companies. According to Amendment 41 of Colorado’s Constitution, officials can’t accept any monetary gifts or gifts valued more than $65 (the limit was $59 when the complaint was filed).

The amendment has some exceptions, such as those for travel a public employee pays for, travel that is part of their job and benefits the state, and travel to conferences at which they are a speaker.

Suzanne Staiert appeared to represent the Public Trust Institute, the nonprofit group behind the complaint. The Colorado Sun has reported the nonprofit was formed two days after the complaint was filed and is led by former Republican state speaker of the House Frank McNulty.

Sen. Bob Gardner testified as a witness for Staiert. He discussed traveling with other Colorado lawmakers to Connecticut to a federal event marking the commission of the U.S.S. Colorado, which he had sponsored a legislative resolution for. Gardner testified he and the other General Assembly members paid out of pocket for their travel and hotel costs. The complaint alleges a private company, M.D.C. Holdings paying for Hickenlooper’s travel and hotel costs violated Amendment 41.

But when questioned by Grueskin, Gardner said Hickenlooper made remarks at the commissioning, and said there was “no doubt” he was there as Colorado’s governor.

Grueskin also asked Gardner about the significance of the boat being named after Colorado, seemingly to establish that the money spent has a public benefit.

“There was an important public purpose associated with spending Colorado funds on this objective, correct?” Grueskin said.

With testimony from state controller Bob Jaros, the two sides and commission members also discussed Colorado’s Fiscal Rule 5-1, which governs travel. Grueskin questioned Jaros to establish the rules are for regulating state financial operations, rather than ethical standards. There was discussion about whether travel paid for by a non-state organization, but not as a reimbursement to the state or the employee, requires approval beforehand.

More than four hours after the hearing’s start, Staiert officially called Hickenlooper to testify. She said her remaining questions concerned matters of fact and only Hickenlooper’s testimony could answer them. Staiert said she believes it has been shown that Hickenlooper accepted gifts in excess of Amendment 41’s then-$59 limit, and she planned to question him to find out whether they fell under any of the exceptions, which also include gifts from friends on special occasions.

“There’s the ‘I didn’t know’ category at Bilderberg and whether that was reasonable. There’s the category of friends on a special occasion – whether these were actually invitations from friends – and then there was a category of what I’ll describe as ‘gifts to the state,’” or whether the gifts were for Hickenlooper personally, Staiert said.

She asked the commission to hold Hickenlooper in contempt of the subpoena, and also to strike his defenses to the allegations. She also asked to introduce additional exhibits as evidence about public perception of impropriety and statements Hickenlooper has made about the purpose of the trips in question.

Along with its vote holding Hickenlooper in contempt, the commission voted to adjourn the hearing until Friday morning. Leone said the requested sanctions are serious, and the commissioners should “take a deep breath” before deciding what to do about Hickenlooper’s failure to appear at the hearing.