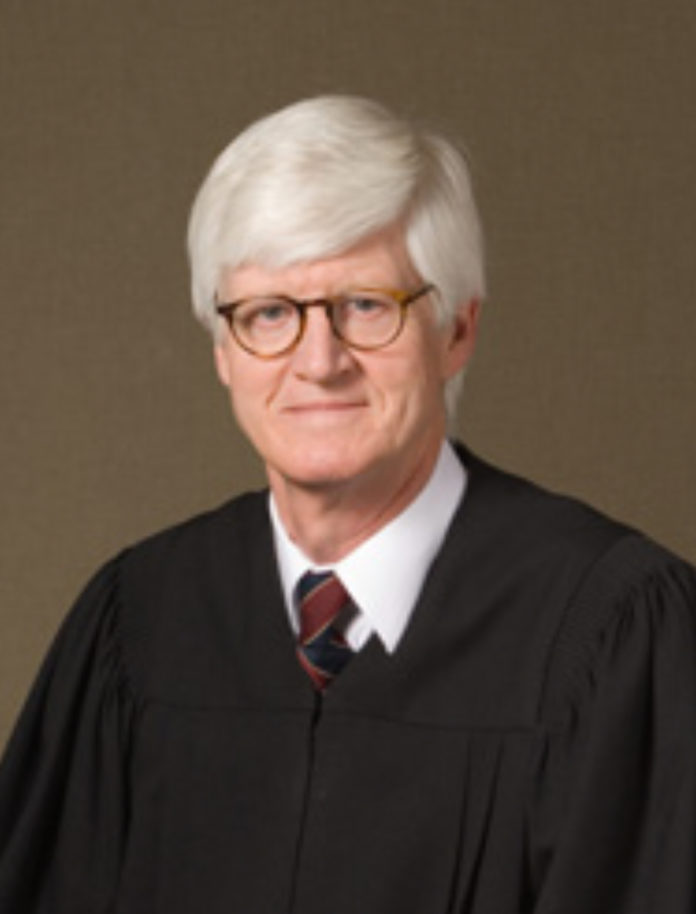 Having served the Colorado Supreme Court since 2000, and as the Chief Justice for the past two, Nathan Coats has led the Colorado’s judicial department through logistical challenges from positional changes at the State Court Administrator’s Office to wildfires and throughout the system-wide disruptions of the COVID-19 pandemic.

In January 2021, Coats will retire as he meets the courts’ mandatory retirement age of 72.

The 20 years he spent on the Colorado Supreme Court are part of a 42-year career spent in the Colorado legal system at different levels in the Colorado Attorney General’s Office — where he worked for eight years —  and the 2nd Judicial District as the Chief Appellate Deputy District Attorney for 14 years.

Along with the announcement of Coats’ retirement, the judicial branch also publicized a decision to set shorter, rotational terms for the chief justice as well. Justice Brian Boatright will serve in that position upon Coats’ retirement, and Justice Monica Márquez will serve as the following Chief Justice after him.

While Coats was part of the process, it was not his decision, he said. The Colorado Constitution stipulates that the Chief Justice must serve as the executive head of the state judicial branch, which comprises all state district and county courts as well as the Supreme Court and Court of Appeals. The primary motivation for this change of term length, as Coats understood it, came from the “generational break” between himself and the other justices. Many people he had served with throughout his career have retired or left, and thus, there is a large gap of ages with each of the other justices more than a decade away from retirement.

“I think there’s always been a question about how worthwhile it is to have somebody be chief for a very long time,” Coats said.

A term limit of explicit number of years has not been decided yet to Coats knowledge, but discussions surrounding the idea was that regular terms of different individuals in office. Coats’ sense was that three to four-year terms could be likely but could depend on circumstances.

His time as Chief Justice has lasted a little over two years and has been a time of immense change. Not only due to the current pandemic and the challenges faced by the judiciary like closing courts and providing a forum for legal affairs, but within months of his becoming chief justice, wildfires threatened many courts, Coats said.

Since becoming chief justice, Coats said the State Court Administrator’s Office has grown to approximately 250 people, compared with a relatively small office when his career began, and all the senior positions in that office have changed. A considerable amount of his time as chief has been dedicated to the office’s details, Coats said.

“The Chief Justice has these two very distinctly different hats,” Coats said. “The chief of his own court and continues to do business on the court as one of seven … but in addition, the chief now has the hat of being a chief administrator or executive over the judicial branch.”

The judicial branch employs roughly 3,900 court and probation employees, comprised of 410 justices, judges and magistrates. In the 2019 fiscal year, the state courts heard over 640,000 cases of all types, and the probation system supervised more than 80,000 adult and juvenile offenders, according to the release.

With 22 judicial districts in 64 counties and a rising number of staff members, the Chief Justice this year has had to weigh in on operational matters in courts throughout the state because of the pandemic, Coats said. In the last five months alone, the chief judges of the state and court administrator met twice a week for an hour and a half, where they discussed how to adapt, whether to call jurors for trials and other details. Coats expressed his pride in the communication and work completed by chief judges around the state in response to the pandemic.

“I joke with my colleagues now that I have to fight for a little bit of time to do law,” Coats said.

Coats said he feels the use of technology and changes to certain tools used by courts due to the COVID pandemic will have lasting impacts on court operations. He added that uniform orders do not always work well due to the vast geographical and demographical situations of the state.

A LIFE IN LAW

For someone who has spent such a long career in law, Coats began his career not knowing he would be a lawyer. Coats throughout college explored many academic interests and didn’t have any particular aspirations to be a lawyer as a young man — none of his family were attorneys — but the possibilities of a law degree seemed to finally entice him. As his final year approached, he had to decide whether to take the LSAT or GRE and continue his education.

He came to Colorado to attend the University of Colorado Law School in 1967. His father and family had hailed from Colorado, but his father’s career in the military took them elsewhere. But for Coats, Colorado was where he felt was his home. He had returned often to visit and accepted without much thought that he would return here.

“Actually, it was in that first semester than I got so enamored over the course of studies and [law] was so different from anything else I had been in before,” Coats said, adding it was a transformative experience. “It changed the way I thought.”

His education in law was interrupted after a semester, however, by the Vietnam War. Coats took a three-year hiatus from law school to serve in the U.S. Army as an officer, eventually working in intelligence in Germany.

Upon returning to Colorado, and once his career in law, he worked as a public sector attorney in the state Attorney General’s Office and the Denver District Attorney’s Office. One case followed him through both offices and brought him to argue before the U.S. Supreme Court. Colorado v. Connelly involved a man who had flown to Stapleton and told a police officer he approached on the street that he had killed a Native American woman. The man had claimed the voice of God told him to admit to the crime, and he showed the authorities where he committed a murder.

Coats added that many people believed the man was paranoid schizophrenic. The man’s lawyers argued his confession was involuntary because it was effectively coerced by his psychosis. The man won through the Colorado courts and state Supreme Court, and as a result none of the information he provided could be used, and all evidence was suppressed.

Coats was working in the Colorado Attorney General’s Office on appeals and wrote an amicus curia brief for the U.S. Supreme Court with more than 20 states, which the court took up. While the court was considering the case, Coats moved to the Denver District Attorney’s Office, and he then argued in the Supreme Court and made an appearance on to 60 Minutes about the case, eventually winning.

Coats hasn’t yet decided what he will do upon retirement, though he could stand to be out of work for a little while — the first time in his entire adult life. He wants to watch the tide of the coming year and see what develops.